Skip to Main Content
It looks like you're using Internet Explorer 11 or older. This website works best with modern browsers such as the latest versions of Chrome, Firefox, Safari, and Edge. If you continue with this browser, you may see unexpected results.

Publishing in the university's own series: References 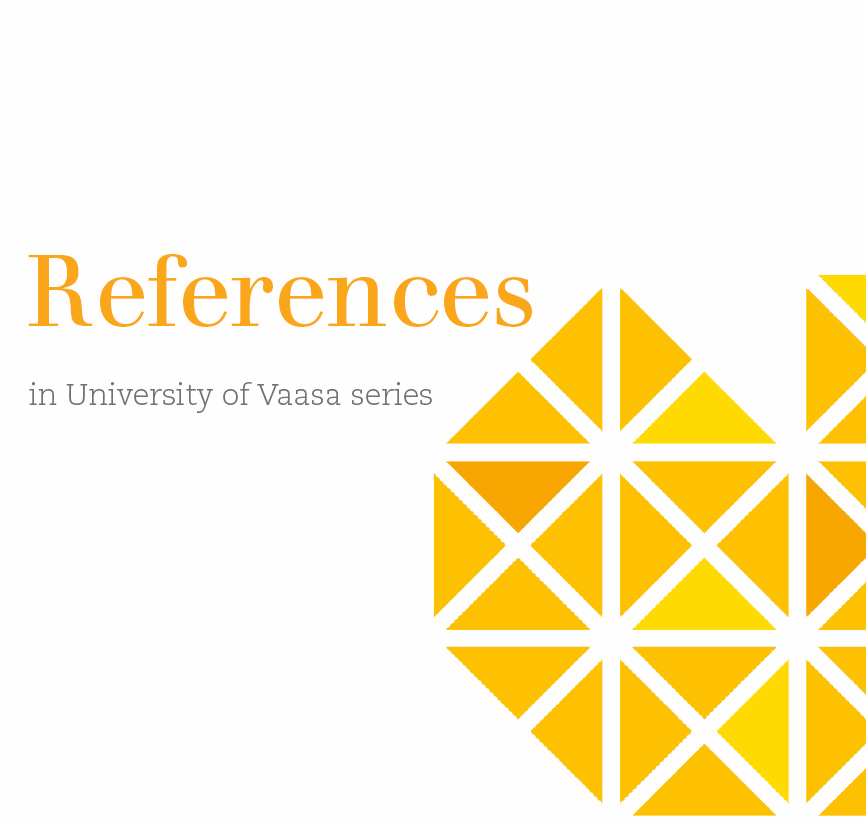 General principles and how references are indicated

In the University’s publication series, references within the text are usually enclosed in brackets. Another approach, the running numbering of references, is also possible. Footnotes should be used as sparingly as possible. Use a consistent referencing system throughout your work.

A reference in the text

This applies to the reference policy in cases where references are cited in brackets in the body of the text. The reference is enclosed in brackets as follows: 1) Author/s, 2) year of publication, 3) colon, and 4) page number/s. If page numbers for an e-book are incorrect or missing completely, you can refer to the number of the chapter or section, for example.

You may have cited Ilkka Niiniluoto in Johdatus tieteenfilosofiaan, which appeared in 1999. His proposition, which you cite in your own words, is on page 33 of the book. The reference should be made as follows: (Niiniluoto 1999: 33).

If you cited Niiniluoto’s thinking from several pages of the book, the reference should be: (Niiniluoto 1999: 32–34). The mark between the numbers is a dash, which is longer than the hyphen.

If a citation continues from the same book and the same pages, subsequent references can be abbreviated “Ibid”.  (Ibid: 15, 53, 88). In this case the citations must be consecutive.

If the cited text has no personal author, the name of the organization (author) is preferred, or the document should be used: (University of Vaasa, Faculty of Humanities 1999:12) or (Narcotics Decree 1993: Section 7).

If the writer’s name appears in the body of the text, it need not be repeated in the brackets. Only the year and a reference to pages, if necessary, are put in the brackets. Example: Tornikoski (1999: 12–13) suggests that...

If a conclusion is generalized from a number of sources, all of these are enclosed in the same brackets, for example, in the order of the year of appearance. The references are separated by semicolons: (Tornikoski 1999: 12–13; Koskela 2000: 88).

If to one sentence only, the reference is added immediately after the sentence before a full stop (Mäkinen 2005: 71).

The meaning of the reference can be accentuated by certain words or abbreviations, e.g. compare (cf.) or see. Example: In considering Popper’s views, Niiniluoto concludes that Popper thought criticalness is one of the basic elements of science (cf. Niiniluoto 2002: 33).

The right to quote is a key element of scientific practice and a precondition for the evolution of science. When a paper has been published, its contents can be freely dealt with, even against the author’s will. The right to quote is set out in the Copyright Act: it is permissible to make quotations from a published work if they are compatible with fair use and only to the extent justified by the purpose (Copyright Act 2:22). At the same time, however, this is an obligation to anyone using quotations, as it requires adequate and correct references. Also, the moral rights of the author should be respected: the quotation must obey the spirit of the original text and it must not give a misleading impression of it. Besides, a writer using quotations must accept that his or her published text may be quoted by others.

The use of quotations in research papers shows that the researcher is familiar with the discipline. They are recommended where a mere summary of the point might alter the original idea, when the writer finds it important to preserve the original wording, or in the case of a definition.

A quotation is put in quotation marks in the original form, and if anything is omitted, this is shown with three periods or two dashes in brackets or square brackets. The writer’s own insertions, if any, are enclosed in square brackets.